The Benefits of LED Lighting 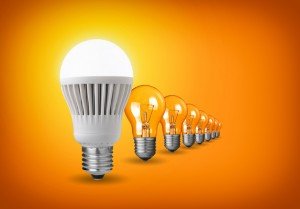 LED lights offer many advantages for your home.

LED lighting is an exciting new technology that offers a great deal of benefits, but are not the optimal solution every lighting application. Here is a quick rundown of how LED lighting works and what kind of advantages you can expect.

LED lighting is a solid-state source that has a significantly longer lifespan than traditional incandescent or fluorescent bulbs. LEDs can have a lifetime of up to 100,000 hours, or between 7 and 11 years. Still, the performance of LEDs will degrade over time and this degradation can be enhanced by the operating environment or temperature.

LEDs utilize semiconductor material instead of a filament or neon gas. LED lights consist of a tiny chip encapsulated in a resin enclosure, and are far sturdier than traditional bulbs because they don’t use fragile components such as glas. LEDs can withstand shock, vibration and extreme temperature better than their traditional counterparts.

Unlike fluorescent lighting that uses mercury, LEDs are made from all non toxic materials. They are also recyclable and their energy efficiency nature makes them a good choice for the environmentally conscious.

LEDs are available in a broad range of colors and offer flexible color mixing abilities. Because traditional bulbs use filters to produce colors it is difficult for them to achieve the same color gamut that LEDs can provide. The color of white LED’s, however, can sometimes be inconsistent. Some white LEDs with the same color temperature can be perceived to have a different tint.

One of the most important benefits of LEDs is that they do not produce heat and therefore can be left on for hours without consequence. LEDs reduce safety risks associated with traditional bulbs such as burns and fires, and allows them to be used in applications that were problematic for conventional sources such as illuminating food or textiles.

LEDs are often more expensive compared to other light sources, and LED manufacturers are still working to reduce production costs. However, LED light systems are significantly more energy efficient and consume up to 90% less power than traditional bulbs. LED lights can dramatically reduce energy consumption costs over their lifespan.

Looking to install LED lighting in your home? Haramis Electric can help you get the job done. Haramis Electric is an Anne Arundel County-based electrical contracting company. We offer both residential and commercial services for clients throughout Maryland. Haramis Electric provides incomparable service that will give you the electrical work you need without pushing you over your budget. Request a free estimate online or by calling 410-451-0200.